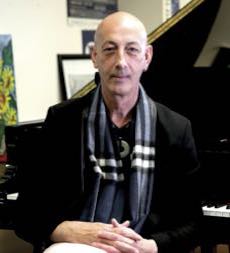 After completing his BMus at the Melbourne Conservatorium, Paul Rickard-Ford was awarded the Clarke Scholarship to undertake postgraduate studies at the Royal College of Music, London where he gained the ARCM and the Dannreuther Prize for the most outstanding concerto performance. He has won many major competitions and awards in Australia, including Commonwealth winner of the 1983 ABC’s Instrumental & Vocal Competition, and in 1984 was invited to perform before HRH the Duchess of Kent in a recital at the residence of the American Ambassador in London. He returned to Australia in 1985 to undertake performing engagements with the ABC and returned to the UK for further study in 1986 as the inaugural David Paul Landa Memorial Scholar. In 1988 he received an “Australia Achiever” award for his achievements in music and was presented with the award by the Prime Minister at a special reception in Sydney during the Bicentennial celebrations.

At the end of 1988 Paul returned to the UK where he gave recitals in London at St. James’s, Piccadilly, Leighton House and a series of recitals at Colnaghi Galleries as well as performing at various festivals throughout England. He remained in London until 1994 when he was appointed as a Lecturer in Piano at the Sydney Conservatorium. He is in demand as a recording artist, recitalist, examiner, adjudicator and master teacher throughout Australia. In 2000 he was invited to give masterclasses at the Beijing Central Conservatory and the Shanghai Conservatory and gave recitals at the Australian Embassy in Beijing and the Shanghai Concert Hall.

In recent years he has been a frequent performer on ABC Classic FM and has recorded Liszt’s complete “Annees de Pelerinage”, 2 all Schumann recitals, an all Chopin recital and several “Sunday Live” programs, all of which were broadcast nationally. He was a featured performer in the popular “Keyboard Preludes” program on Classic FM in 2007 where he performed and discussed Preludes by Scriabin and Rachmaninoff. Together with his piano duo partner, Natalia Sheludiakova, he has given Australian and World premieres, most notably Carl Vine’s Piano Sonata for Piano Four Hands, a special commission for the SCM’s 101 Compositions project.

In 2008 he was appointed as a Federal Examiner for the AMEB. He tours Asia annually and regularly visits Malaysia, Taiwan, Singapore, Guangzhou, Shanghai, Beijing, Seoul and Hong Kong giving masterclasses for the Sydney Conservatorium of Music. Paul Rickard-Ford presently serves as Senior Lecturer and Chair of the Piano Unit. He completed his PhD on the late piano works of Schumann in 2010 and was shortlisted by the University of Adelaide for the University Medal. During 2006 to 2016, he was also appointed as Chair of Piano at the Sydney Conservatorium of Music.

His students and former students have achieved outstanding success in local, national and international competitions and have been major prizewinners at important competitions in Australia, New Zealand, China, Hong Kong, Thailand, USA, France, Italy, Spain, Belgium, Germany, Croatia, Russia, Denmark and the UK. In both the 2012 and 2016 Sydney International Piano Competitions his students were awarded Best Australian Pianist. He is a pioneer in the field of professional development for piano teachers and is in demand as a guest lecturer at pedagogy conferences throughout Australia.